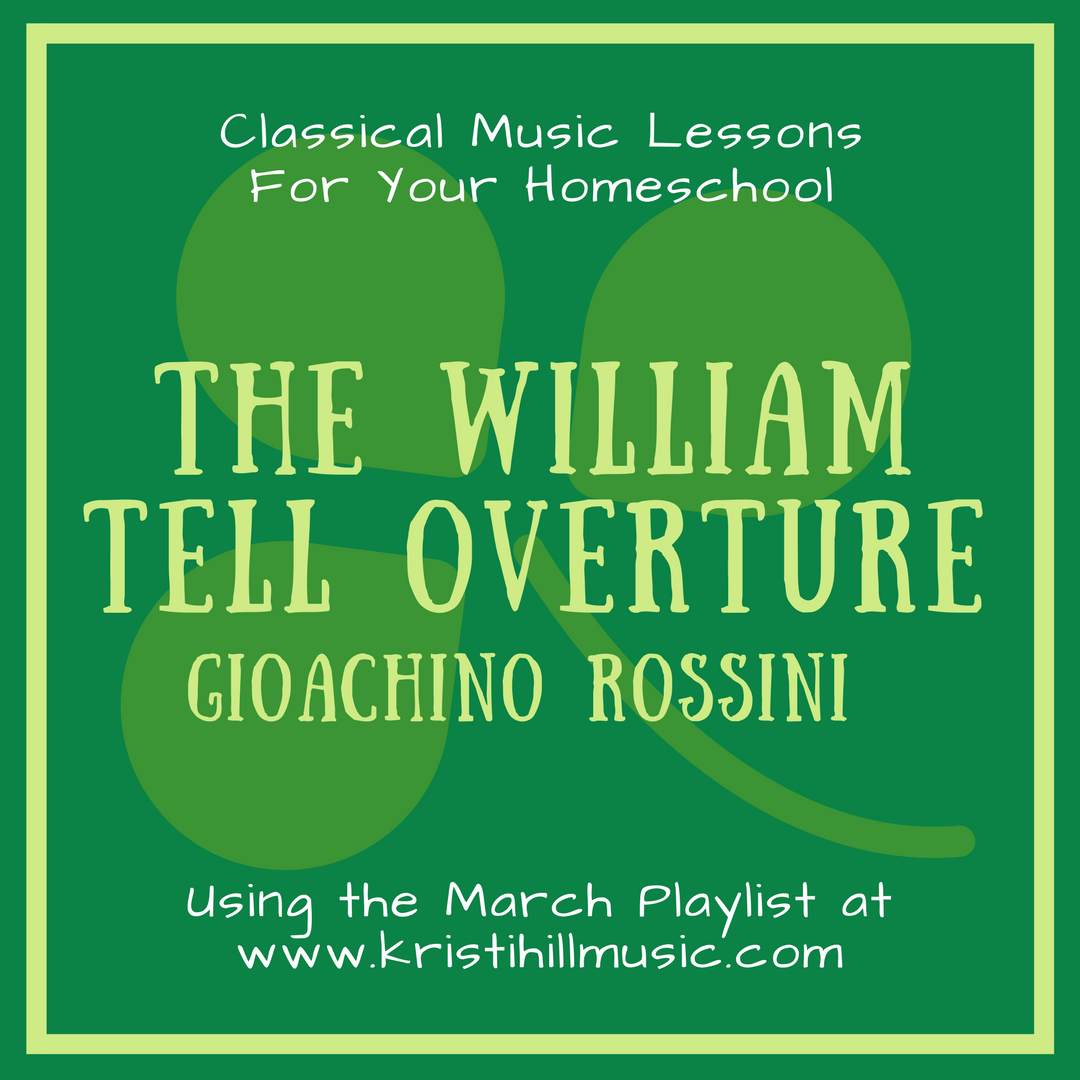 The William Tell Overture was added to the March playlist for a significant historical reason: it was the first piece of recorded music ever transmitted on the radio. The event took place on March 5, 1907 when Lee De Forest (America’s first DJ?) chose the piece to grace those virgin airwaves.

But before we listen to the music, let’s learn a bit about the composer…

You have to love Gioachino Rossini. He wrote 39 operas in 19 years, most of which were pretty good. Then he retired to become a foodie. He ate good food the rest of his life and died content at the age of 76.

Rossini was born in Pesaro, Italy. As a young child he wasn’t that serious about much of anything, including schoolwork. By his early teens he was skilled enough on the harpsichord to play with a local theatre company. He was composing original music by time his family moved to Bologna at age 12.

(And if you are now singing this, we are truly friends.)

He left school at 18 to help his parents financially and received an unexpected commission: a one-act opera for a Venice opera house. He accepted and was successful. More commissions came his way. Three years later he completed his first full-scale opera and the Venetians loved it.

Rossini was a hit.

G-man was young, successful, and decidedly popular – so popular, you might call him the pop star of his day. He wrote popular music that appealed to everyday people. Nothing high-brow, nothing fancy, nothing intimidating – it was easy listening and radio-friendly (if radio had existed in the early 1800s.)

Rossini moved his operation to Naples to win over yet another Italian city and thrived there as well. By this time he was receiving commissions from all over Italy – plus great cities like Vienna, London and Paris. He was solely known for Opera Buffa, comic opera known for everyday settings, local dialects, and simply melodies.

To state again: Rossini wasn’t fancy. He was popular. He was the Justin Timberlake of his day.

Cantankerous Ludwig Van Beethoven was once said to have met Rossini and told him, “Ah, Rossini. So you’re the composer of The Barber of Seville. I congratulate you. It will be played as long as Italian opera exists. Never try to write anything else but opera buffa; any other style would do violence to your nature.”

This was an insult, in case you can’t tell.

Rossini was at the height of his popularity in 1816 when The Barber of Seville premiered in Rome. He was 24 years old and wrote the entire thing in 15 days. His prolific career would wrap up 13 years later when his last opera, William Tell, premiered in Paris. After that, he chose retirement and spent the rest of his life celebrating good food, good friends, and a good life.

Now that you know a little of his life, let’s take a look at his most popular piece of music.

The William Tell Overture is a winner for kids. It came into popularity as the theme song for The Lone Ranger and hasn’t left the American musical conscience since.

Now how about a little subject integration? The story of William Tell is easily brought to life by pairing this great music with literature: 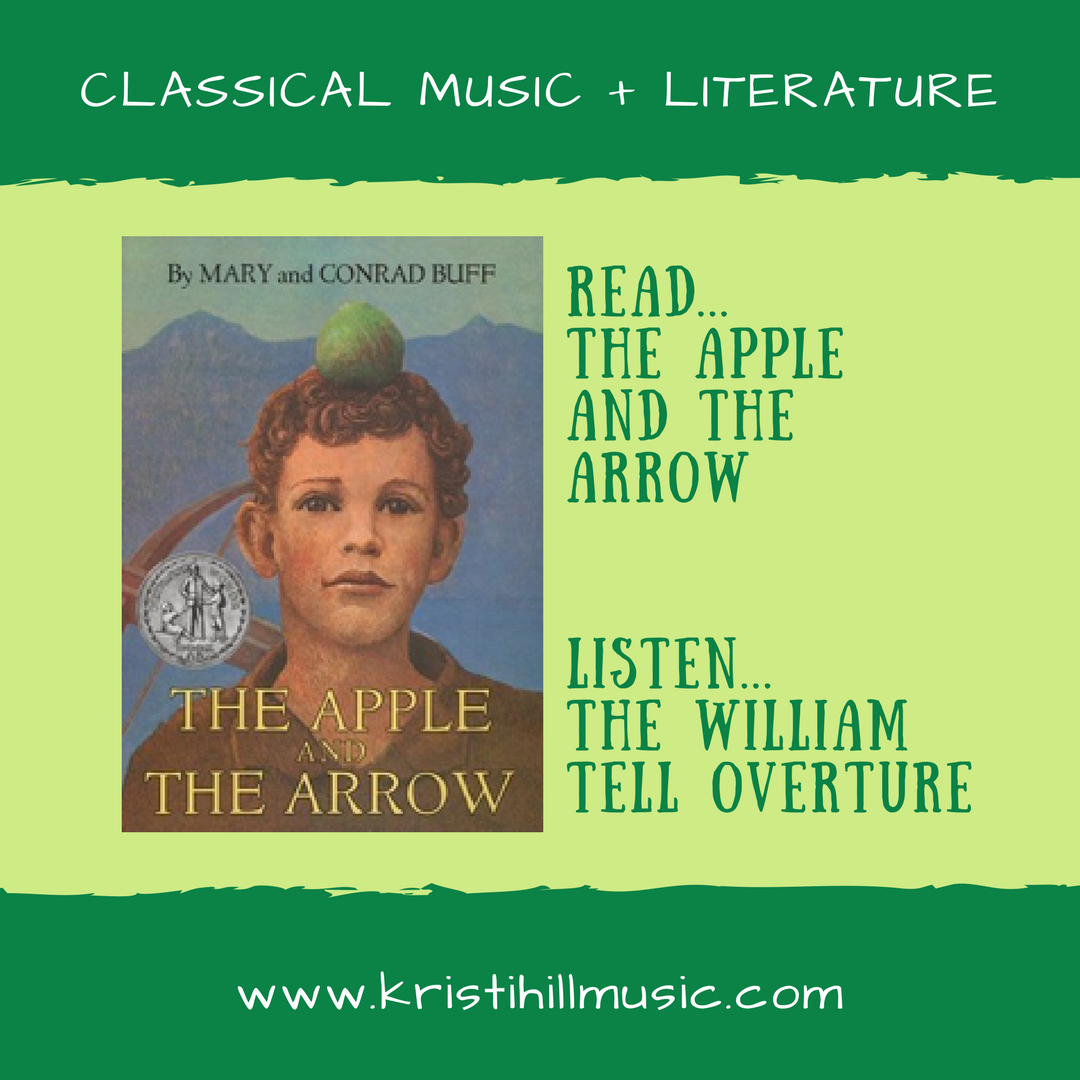 The Apple and the Arrow is a Newbery award winning re-telling of the tale of William Tell. Enjoy the music and this add this to your literature studies for excellent subject integration!