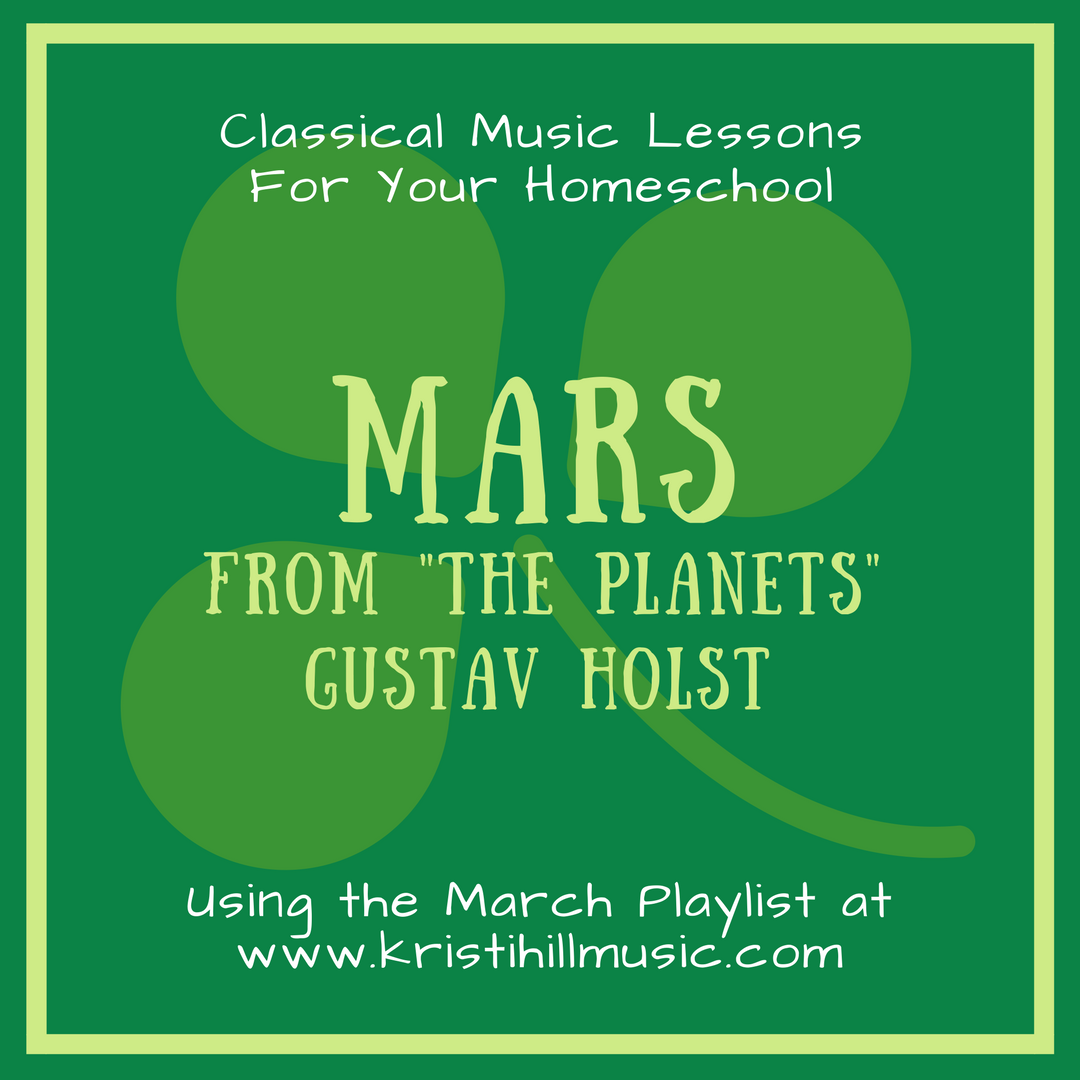 The March playlist rolls on…here are the lessons we have done so far:

Have you ever wondered where the names of the months came from? They roll off our collective tongues without thought, but when you stop to think about the actual names, they start to sound funny. (Kind of like what happens when you say the word “fork” over and over. It becomes very weird. Oh. That’s just me? Moving on.)

Learning the origin of the names of the months is a really interesting activity for kids. Here is a good place to start. March got its name because that was when soldiers returned to war after the religious holidays of the winter season. Mars was the Roman god of war, so there you have it. Pretty interesting!

This means our March playlist is the perfect place to introduce one of my favorite collections for kids: The Planets by Gustav Holst. Gustav was on the January playlist because he penned the melody for the gorgeous In the Bleak Midwinter. (It was 85 degrees where I live this week, and that post makes me remember the 3-5 actual cold days we had this year, when it actually felt good to cozy up under a bunch of blankets with a cup of hot tea and Gustav’s melancholy melody. Winter in the south is, how shall we say? Ambiguous. Moving on.)

Gustav was kind of fascinated with all things outer space, and he studied astronomy and astrology with fervor. For The Planets, he took inspiration from the Roman gods and goddesses that inspired each planet’s name and wrote corresponding music to match. (He was also obsessed with literature and once wrote an overture honoring Walt Whitman. Eclectic guy, that Gustav.)

Because Mars is the god of war, it is pretty easy to predict what this is going to sound like. But take a minute to have your kids imagine it in their heads first. Then give this a listen:

Did the music match their imaginations? Did they hear how very warlike it is? Take special note of the how the drums are used to create a feeling of impending doom. Powerful!

Mars, along with the rest of the collection, is an obvious choice for subject integration. Incorporate it as a soundtrack during science lessons revolving around the solar system or humanities lessons involving Greek and Roman gods and goddesses.

This website uses affiliate links – thanks for your support!