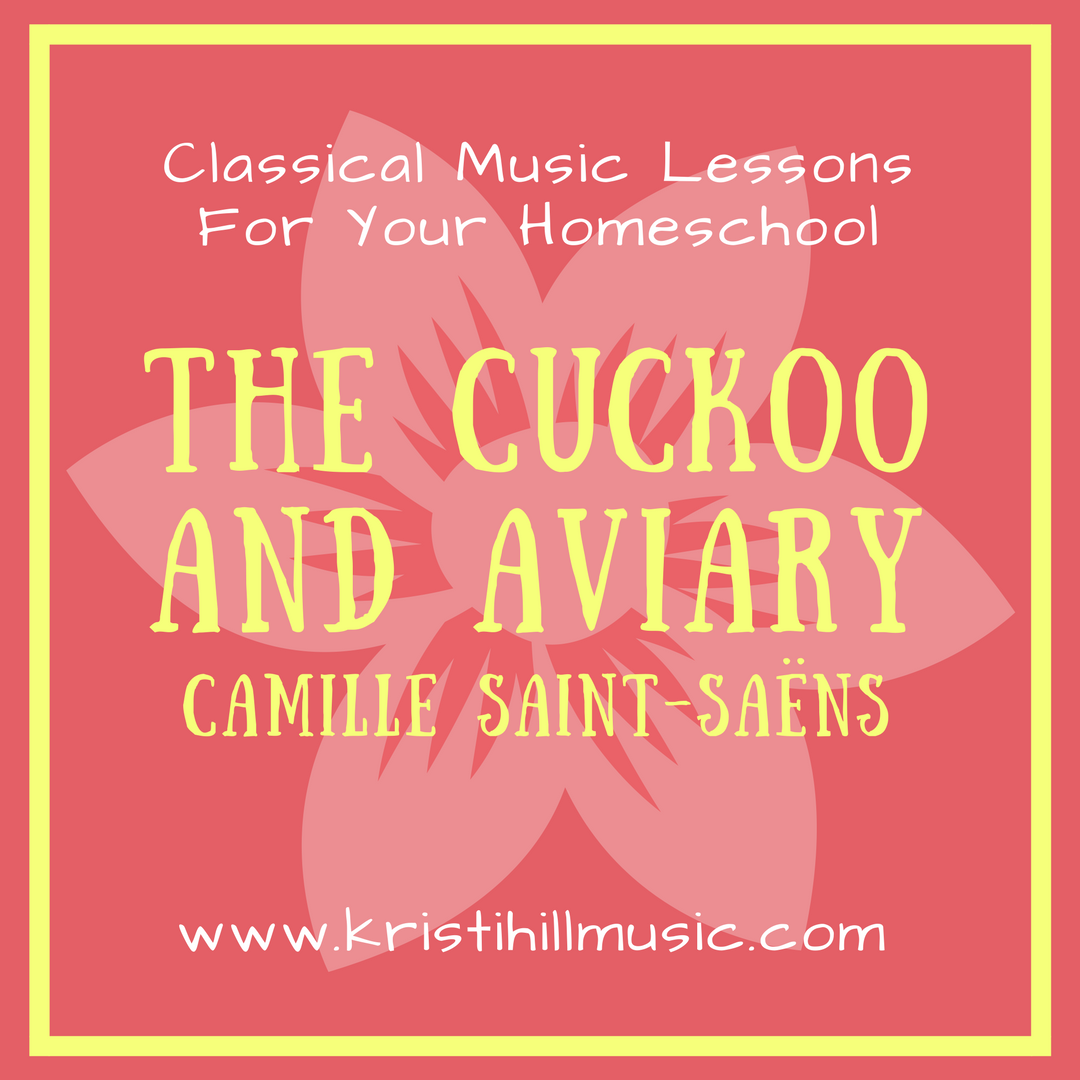 Here are our May Lessons so far:

Teach Your Kids: The Cuckoo and Aviary

Springtime is when the birds begin to sing.

We are blessed to have lots of trees in our yard, which means plenty of real estate for our birdy friends to build their nests and sing their songs. I love it, especially in the mornings. During May, the air is still cool and not riddled with the soul-defeating humidity that will descend upon the South in a month or so.

Not that it bothers me.

But for now, the air is crisp, the birds are singing, and all is well.

Classical Music for the Birds

Classical music is chock full of bird-inspired music. Composers have taken inspiration for centuries from birdsong, and we have covered a couple of examples on the blog already: Spring (from The Four Seasons) in March and The Lark Ascending a couple of weeks ago.

Today I have a double feature for you from Camille Saint-Saëns’ delightful Carnival of the Animals. These are great introductory pieces for children who might be reluctant classical music listeners. The representation is super accessible – even 2 and 3-year-olds can hear how the instruments mimic bird sounds.

But the Carnival might never had existed had it not been for a little late-1800s composer drama.

Saint-Saëns was French and revered by his people.

Across the border, fellow composer Richard Wagner was the delight of the German people. He was especially lauded after his death in 1883.

Saint-Saëns made the mistake of throwing shade at Wagner’s music, insinuating it was over the top and unnecessarily dramatic. He was French, remember? Tasteful, chic, refined. That was his deal.

The German people were none too happy about those opinions and let Saint-Saëns know when he embarked on a German tour in 1885. Wagner’s death was fresh on everyone’s mind and nobody was in the mood for a haughty Frenchman’s unwelcome criticism. The tour was a disaster. Camille was practically run out of the county, his music heartily rejected.

Defeated and depressed, Saint-Saëns withdrew to a village in Austria to lick his wounds and recover. He passed the time by writing whimsical little pieces of music that sounded like different animals. He had no intention of the pieces ever being heard, but eventually agreed to a private performance for a few friends. Reluctantly agreed.

Well, people loved it. To Saint-Saëns’ dismay, they loved it.

He was fairly embarrassed by his little animal songs and felt like they did not represent him as a serious musician. He feared they would gain popularity, so he insisted the collection not be published until after his death. He relented on The Swan, which I guess he felt represented his seriousness well enough.

Aside: The Swan is one of my very favorites – it is listed on my Top 10 Favorite Peaceful Classical Music Pieces!

A Right or Wrong Decision?

His request was honored.

Saint-Saëns died in 1921, and The Carnival of the Animals was published the next year. It is now considered to be some of his most famous work.

So, I guess he was right. The public would have loved his little animal songs.

But, in my opinion, he was also very wrong.

Saint-Saëns was understandably concerned with public reaction – his livelihood was at stake after all. But if, perhaps, he had not been quite so concerned about managing his reputation, he could have experienced the delight of seeing people respond joyfully to his charming songs. The collection is full of clever pieces that accurately represent a menagerie of animals, equally engaging for children and adults. But for Saint-Saëns, his reputation mattered more.

It brings up an interesting question, especially for older children: What might you be missing out on because you care too much what people think of you?

Camille Saint-Saëns may have protected his image, but he missed out on knowing how his music made people happy. Was it a good trade? Why or why not?

As you listen to The Cuckoo and Aviary, listen for the birdsong. And then ask your kids why Saint-Saëns would not have wanted people to hear this music? There are no right or wrong answers — it truly could have been the best move for his career and one he never regretted.

But maybe he did?

Ponder, discuss with your kids, and enjoy!