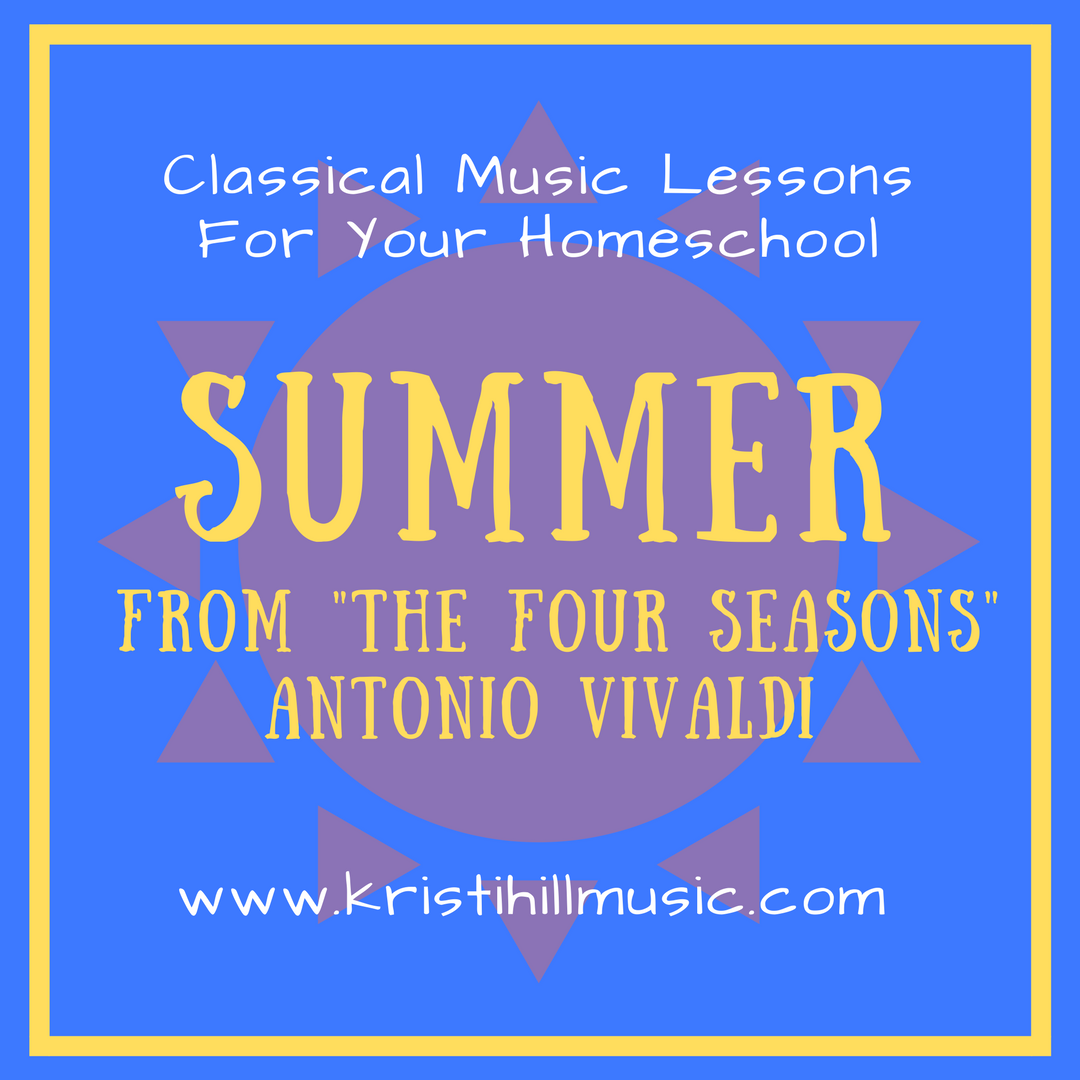 When you are deep into a year-long project writing seasonal music appreciation lessons, Vivaldi is kind of your best friend. He was the original seasonal classical music guy, composer of the crazy-famous The Four Seasons.

We’ve covered it twice on the blog already – Winter and Spring. You can find some background info in both of those posts, so I won’t belabor that here. It is summer after all, and summer music lessons should be short and to the point, no?

Each “season” from Vivaldi’s work contains three movements, or parts. Today’s lesson focuses on the 2nd movement, because that is the one I find most engaging for kids. (The 3rd is pretty powerful, though!) This video begins at the 6:00 mark, where the 2nd movement starts:

As mentioned in the previous posts, Vivaldi based these pieces of a series of sonnets (some people think he wrote them himself, but nobody knows for sure). If you can take a minute for a little 18th century poetry, give this a look:

1st Movement:
Beneath the blazing sun’s relentless heat, men and flocks are sweltering, pines are scorched.
We hear the cuckoo’s voice; then sweet songs of the turtle dove and finch are heard.
Soft breezes stir the air….but threatening north wind sweeps them suddenly aside. The shepherd trembles, fearful of violent storm and what may lie ahead.

2nd Movement:
His limbs are now awakened from their repose by fear of lightning’s flash and thunder’s roar, as gnats and flies buzz furiously around.

3rd Movement:
Alas, his worst fears were justified, as the heavens roar and great hailstones beat down upon the proudly standing corn.

So pretty much: there’s a storm a comin’…

Now, I live in the south, where afternoon thunderstorms are almost a daily occurrence. It’s hard to picture the same scene in Vivaldi’s Venice, but weather is weather, and storms are universal. And that’s exactly what Antonio had in mind for Summer.

The 2nd movement in great for kids. First I have my students picture their most favorite peaceful summer spot – lake, pool, ocean – or even their own backyard. I have them close their eyes and imagine the most serene of environments — AND THEN I LOUDLY DESCRIBE BEING VICIOUSLY ATTACKED BY BUGS.

They, of course, love this and think I am crazy. And then I tell them that is exactly what Vivaldi was doing with Summer’s 2nd movement. Serenity then bug attacks. For real! Listen again and see if you hear it.

Oops – this lesson wasn’t so short. What can I say? I love The Four Seasons. And it’s also a fancy hotel, so there’s that too.