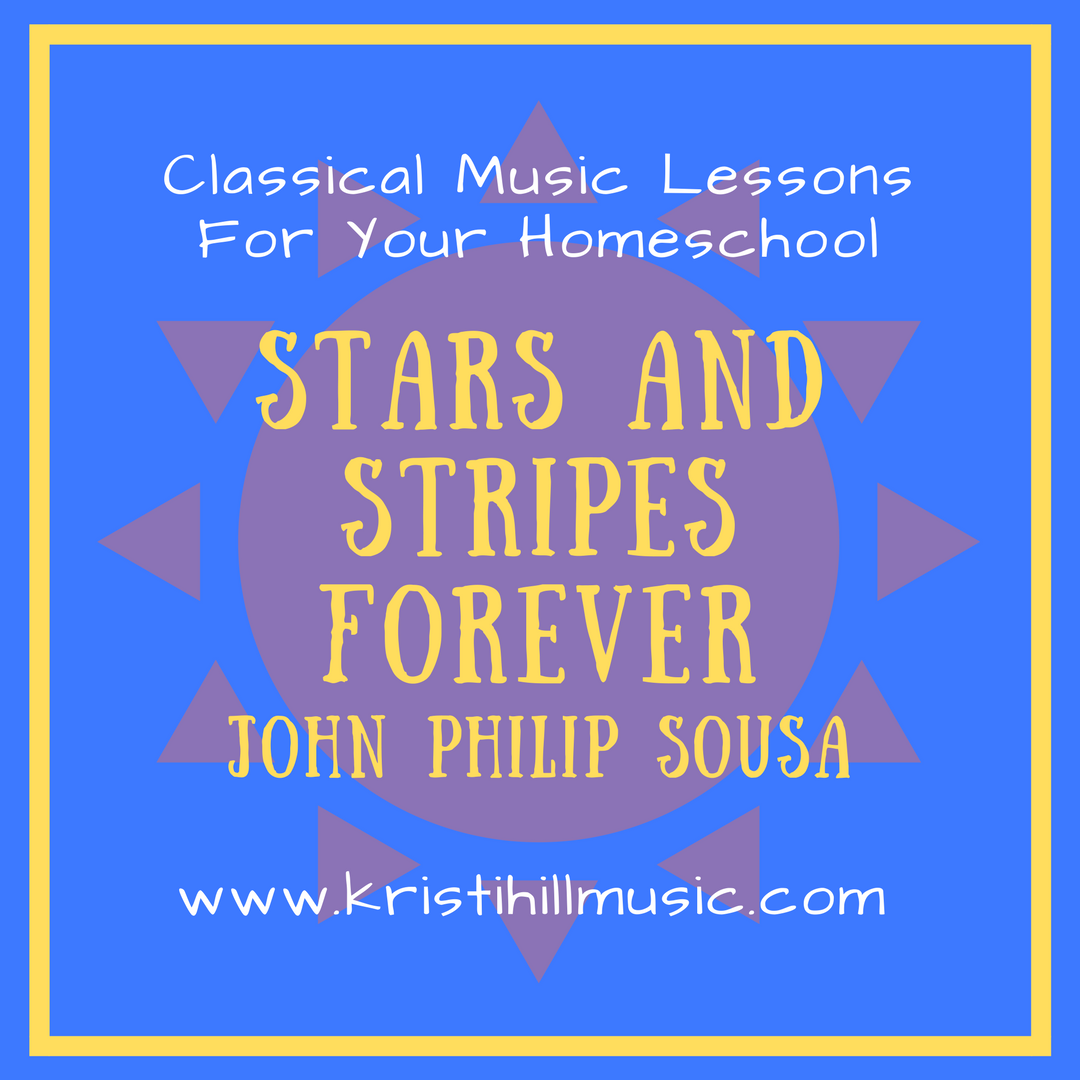 How is it mid-July already?!?

If you are on a year-round homeschooling schedule, I have music lessons going all summer. Here is what we have covered so far from our Summer Playlist:

Okay, in the spirit of the month of patriotism, we move on to today’s lesson!

John Philip Sousa is an American musical treasure. Fitting for the future composer of all things patriotic, he was born in Washington D.C. His parents, however, were of Spanish and Portuguese descent – which I find fascinating! Here was a man raised with strong influences from other cultures, yet he went on to contribute greatly to crafting truly American music.

John’s father was a musician and quickly recognized great talent in his young son. In an effort to prevent him from running off to join a circus band, Papa Sousa enrolled little Johnny as an apprentice in the Marine Corp Band, a move that would strongly impact his son’s future.

John Philip moved up through the ranks (literally) until he became the United States Marine Band Conductor. Also a prolific composer, Sousa wrote 137 marches. His most famous is the piece that was eventually christened the National March of the United States: Stars and Stripes Forever.

Sousa composed the piece on Christmas Day, 1896. He had been vacationing in Europe with his wife and received news of the death of his band manager during the voyage home. Moved and inspired, Sousa created the new music in his head and committed it to paper once he landed on American soil. Stars and Stripes Forever was well-received and quickly adopted. Just one year later, it was named America’s National March by an act of Congress.

Literature Integration Idea: I love using picture books with my young students to bring classical music to life. One of my favorites is John Philip Duck by the amazing children’s author Patricia Polacco. Edward’s pet duck enchants the guests of the famous Peabody Hotel by waddling to Sousa marches, thereby earning his name: John Philip Duck. Tie this great book into the lesson and bring the story of Sousa and his marches to life for your kids!

Finally, in a sharp seasonal contrast, enjoy what happens when a creative arranger considers the spirit of this most patriotic piece and marries it to familiar holiday tune: