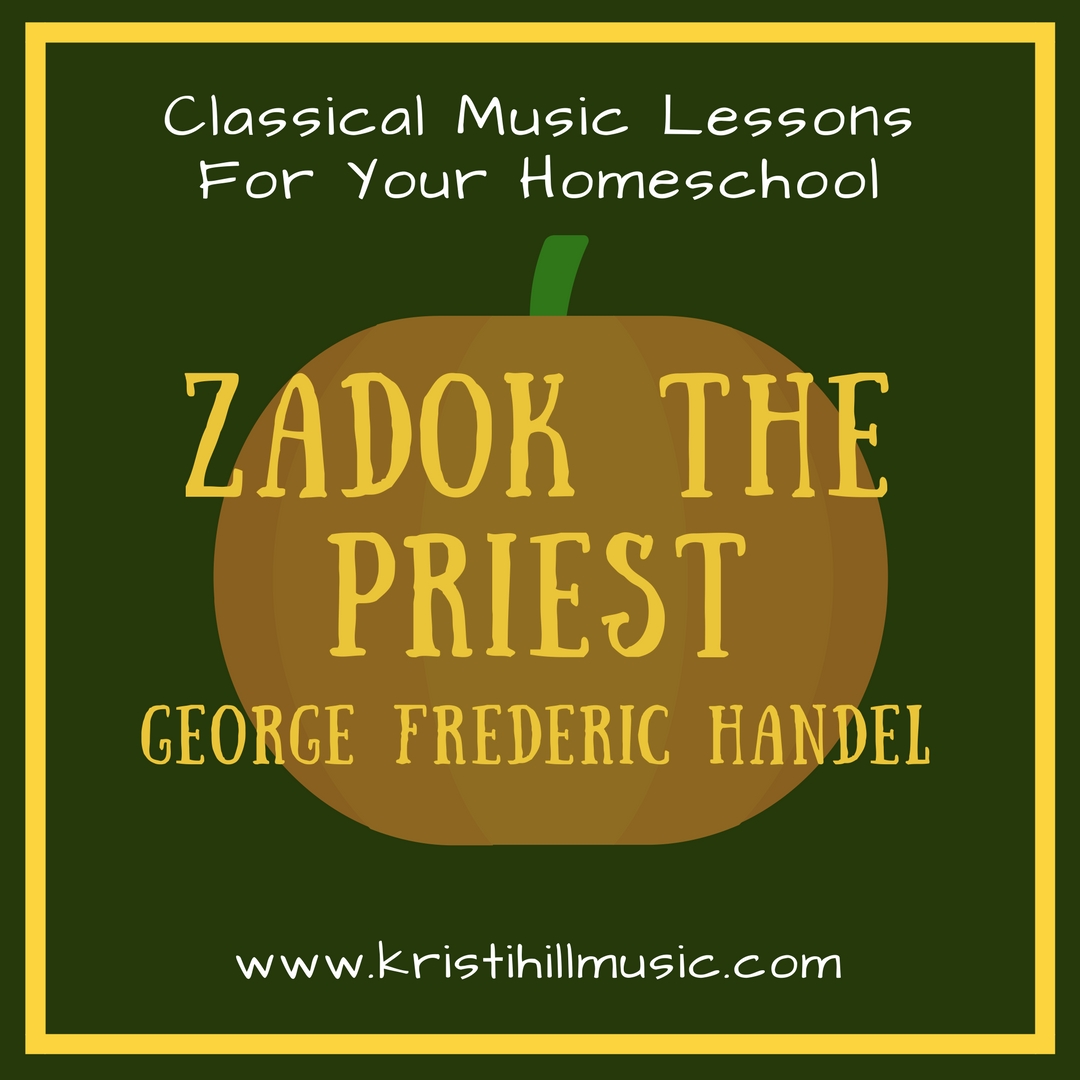 Have you checked out the October playlist? There’s lots of spooky classical music to come later this month, but we are going to kick off our lessons today with a little classical music history.

First, the truth: I love me some George Frederic Handel.

We have talked about him a few times already this year — back in the Spring with Worthy is the Lamb, and over the summer with Music for the Royal Fireworks. He is also highlighted in this fall’s music curriculum series . PLUS he is on the list again this month with Ombra Mai Fu, and December will bring a deep dive into the Hallelujah Chorus.

What can I say? He is my Baroque music crush.

Zadok the Priest was written for the coronation of King George II, which took place on October 11, 1727.

Can you imagine the honor? A new king is being crowned, and you get the call to write a tune for the celebration. Handel was that famous, that important, and that connected to the powers-that-be. It’s kind of hard to overstate what a big deal he was at the time.

If the Super Bowl had existed in the early 1700s, George would definitely have done a halftime show.

Zadok the Priest was inspired by Solomon’s coronation moment, as described in 1 Kings 1:38-40

So Zadok the priest, Nathan the prophet, Benaiah son of Jehoiada, the Kerethites and the Pelethites went down and had Solomon mount King David’s mule, and they escorted him to Gihon. Zadok the priest took the horn of oil from the sacred tent and anointed Solomon. Then they sounded the trumpet and all the people shouted, ‘Long live King Solomon!’ And all the people went up after him, playing pipes and rejoicing greatly, so that the ground shook with the sound.”

Zadok the Priest has been played at the coronation of every British king since its composition. It’s considered a highly patriotic piece across the pond. Perhaps we will all hear it soon when Charles is crowned king? Or William? Can we just skip Charles at this point? #queenkate

This is a fantastic piece, and don’t let the first minute fool you. You are going to think it is all calm and quiet, but just wait:

Try some Role Playing with this one! Robes, crowns, the whole deal – have fun with it!

« Classical Music Playlists for Your Homeschool: October
{Music Lessons for Kids} Ride of the Valkyries // Wagner »