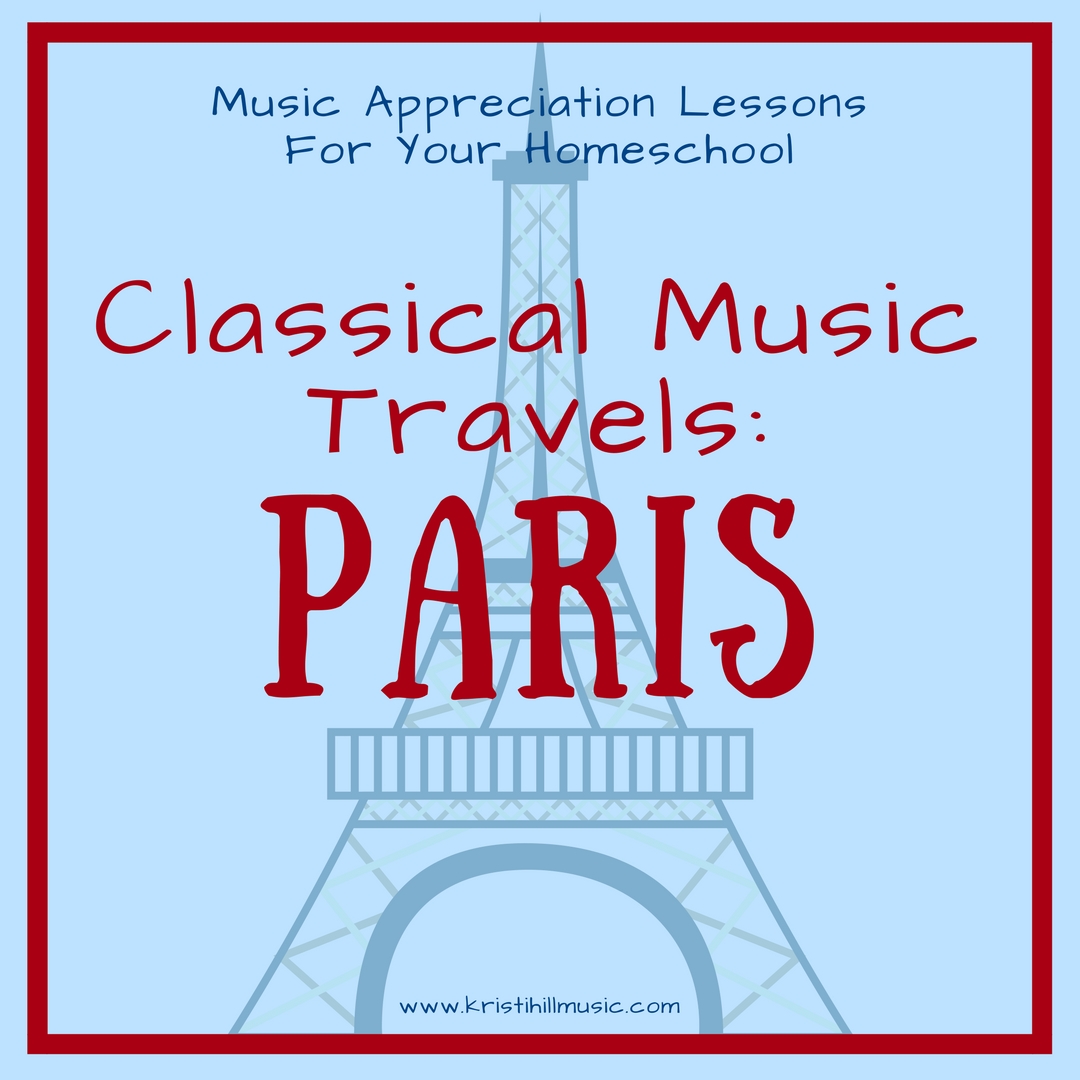 Ahhhh, Paris in the Springtime. That’s a thing, right?

I’ve never been to Paris, but it’s at the top of my Bucket List. It’s practically the reason I have a Bucket List. I often daydream about strolling the Champs-Élysées, croissant in hand, looking oh-so-chic and Parisian. Let’s be real though, I’m in my 40s, so supportive shoes will have to be a thing.

Until I can make it to Paris, I will just have to recreate the mood at home with all my favorite French music. I thought it would be a great opportunity to show you how to mash up music appreciation with lots of other subjects. I say it all the time (because it is true!)…classical music studied in isolation is often way too abstract for young children. Attaching music appreciation studies to other subjects, however? Now we are talking.

First, the music. Here are some of my favorite Paris-inspired pieces…

Aquarium from The Carnival of the Animals // Saint-Saens

Born in the City of Lights, Camille Saint-Saëns is a most Parisian composer. He studied at the Convervatoire de Paris (the Paris Conservatory…but it sounds fancier the other way). He is well known for a delightful collection of animal inspired tunes known as The Carnival of the Animals. With it’s mysterious melody, Aquarium has been compared to the prologue of Beauty and the Beast. It’s not the same. Or is it? You decide. Disney’s Epcot chose Aquarium to begin the soundtrack of Impressions de France, the movie shown in the France pavilion in World Showcase.

Erik Satie was born near Normandy, but moved to Paris at age 4. He also studied at the Convervatoire de Paris, around 30 years after Saint-Saëns. He was a central figure in the Belle Époque period, when the arts were flourishing in Paris. Satie is most remembered for his “gymnopédies,” – a term he sort of made up and no one really understands. No worries, though! We don’t have to understand it to appreciate it. Gymnopédie No. 1  is subtle, restrained, and lovely:

Prelude to the Afternoon of a Faun // Claude Debussy

Claude Debussy was born near Paris, but he was forced to flee to Cannes as a boy to avoid the effects of the Franco-Prussian war. Upon his return, he too studied at the Convervatoire de Paris. Are you sensing theme? It was clearly the place to be. Prélude à l’après-midi d’un faune (say that, three times fast) is one of Debussy’s signature works. Believe it or not, it was considered controversial at the time, and some people think it marked a musical history turning point from the Romantic era to the Modern era. These debates are above my pay grade. I’m more, pour a cup of tea and take a 10 minute vacation:

Offenbach is often considered a German/French composer. Born Jakob Offenbach in Cologne, he made for Paris at an early age, changing his name to the very French sounding Jacques. Want to guess where he studied? You got it. He left the conservatory after a year, however. Studying wasn’t for him. Instead, he poured his energies into pioneering a new form of music: the operetta. An operetta is opera’s delightful little cousin…the one who is cute, funny, and easy to be around. Can-Can is from one of his most famous operettas – it will sound very familiar to you. FUN FACT: in the aforementioned Carnival of the Animals, Camille Saint-Saëns’ paid homage to Offenbach’s Can-Can by slowing it down significantly and calling it The Tortoise. You can listen HERE. Clever!!

An American in Paris // George Gershwin

And now we cross the pond for a very American take on Parisian life. George Gershwin traveled to Paris in the 1920s to soak up all the culture and vibrant street life the city was famous for. This piece is basically a musical autobiography of his time spent in the shadow of the Eiffel Tower. It’s Parisian-inspired jazz…who could ask for anything more? #gershwinhumor

Bonus: The Music You Thought You Were Going To Hear When You Saw The Title Of This Post

I know what you’re thinking…none of this really sounds like the music I associate with Paris. I get it, and there is a good reason for that:

I’m not exactly sure why accordion music became so associated with Paris, but if you are looking for the music that sounds just like Paris, here you go. It’s best consumed with one of THESE.

Here’s where it gets fun. Choose one of these activities (or let them spark your own ideas), and allow the activity and the music to work in tandem with one another.

This website uses affiliate links. Clicks and purchases might produce a small commission. It keeps things running around here and allows me to continue offering free content. Thanks for your support, friends!