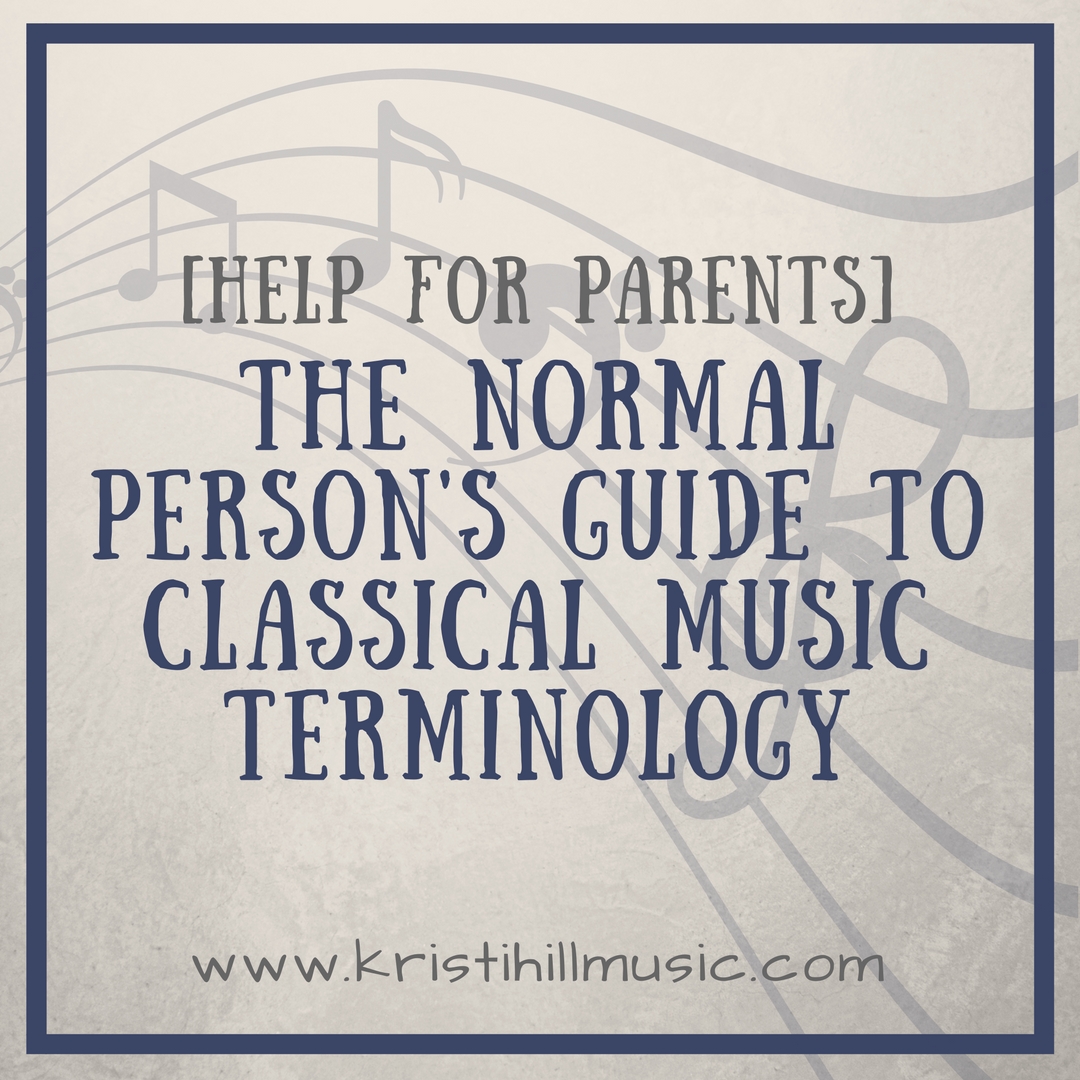 If you are a parent trying to help your kids learn about great music that has stood the test of time, you may run into some terminology roadblocks, especially if you didn’t grow up learning about classical music yourself (as is the case for most of us).

This is the first of a two-part series where I am going to unpack some of the common terminology you are likely to encounter as you begin to teach your kids about classical music. These are very simplified definitions…remember, we are training the affections here, not preparing our kids to be Jeopardy contestants.

Here’s what we’re going to cover:

We will hit the first five this week, and rest next week. Ready? Here we go! (Update: here’s Part 2)

I doubt symphony is an unfamiliar word to you, but you may not know exactly what it is. A symphony hasn’t always been a thing, believe it or not. It developed in the Classical era, as composers began to experiment with larger orchestras playing larger pieces of music. In a symphony, all instruments play together equally (as opposed to a concerto, which you will see farther down on our list). A typical symphony lasts around 30-60 minutes and has four distinct parts called movements. (Sometimes there are more or less, but four is the almost-always number.) Mozart’s Symphony No. 40 is a great one!

The sonata is a tricky because the definition has changed throughout music history. In its simplest form, a sonata means a single instrument is playing, not the entire orchestra. Most of the time a sonata is for piano or organ. But here’s where it gets complicated: a sonata can also be for a solo instrument like oboe, violin, or cello. In that case, a piano plays along in the background. Beethoven’s Moonlight Sonata is probably the most famous ever:

Have you ever heard a string quartet play at a wedding? It’s easy for us to think that a string quartet has always been a thing, but just like a symphony, it hasn’t. Chamber music developed because royal people wanted to hear live music in smaller venues. It wasn’t always sensible to have a full orchestra playing around the palace, you know. So composers began to write chamber music intended for small groups. That’s is how the string quartet came to be. Try Haydn’s Emperor Quartet (if it sounds familiar, it might be because it’s the tune for the hymn Glorious Things of Thee are Spoken):

A concerto is pretty easy for children to understand. I describe it like this: one instrument gets to be the star, and the other instruments are the helpers. That pretty much covers it. There are concertos for all kinds of instruments, but piano and violin are the most common. Vivaldi’s The Four Seasons is a perfect example. The violin is definitely the star! This is the third movement of Summer, also known as classical music’s rock anthem:

I will be honest: I do not teach my students much (anything) about masses. They are the heaviest pieces of classical music you will find, as they were written for solemn religious services. A mass is almost always sung in Latin, so that’s another reason it’s tough for kids. But it’s still great to understand the terminology. Some people think Bach’s Mass in B Minor is the greatest one ever composed. Listen and see what you think. It’ll only take you a couple of hours to finish it 😉

Check back for the rest of the list next week!

« Teach Music Through Animated Movies: Edvard Grieg’s “In the Hall of the Mountain King” in “Trolls”
[Help for Parents] The Normal Person’s Guide to Classical Music Terminology, Pt. 2 »