I talk a lot about subject integration here on the blog, and it is a major part of my music curriculum. I believe classical music studied in isolation is way too abstract for young children, and subject integration can be your secret weapon when it comes to making music appreciation meaningful to your kids.

This is the ninth post in a ten-part series designed to show you how to take a piece of great classical music and use it as a gateway into other subjects.

Hopefully, by the time school starts next year, I will have tipped your thinking toward how you can incorporate music appreciation into everything else you are doing. Music appreciation will easily slip in and out of your lesson plans and your home will be filled with great music that has stood the test of time. 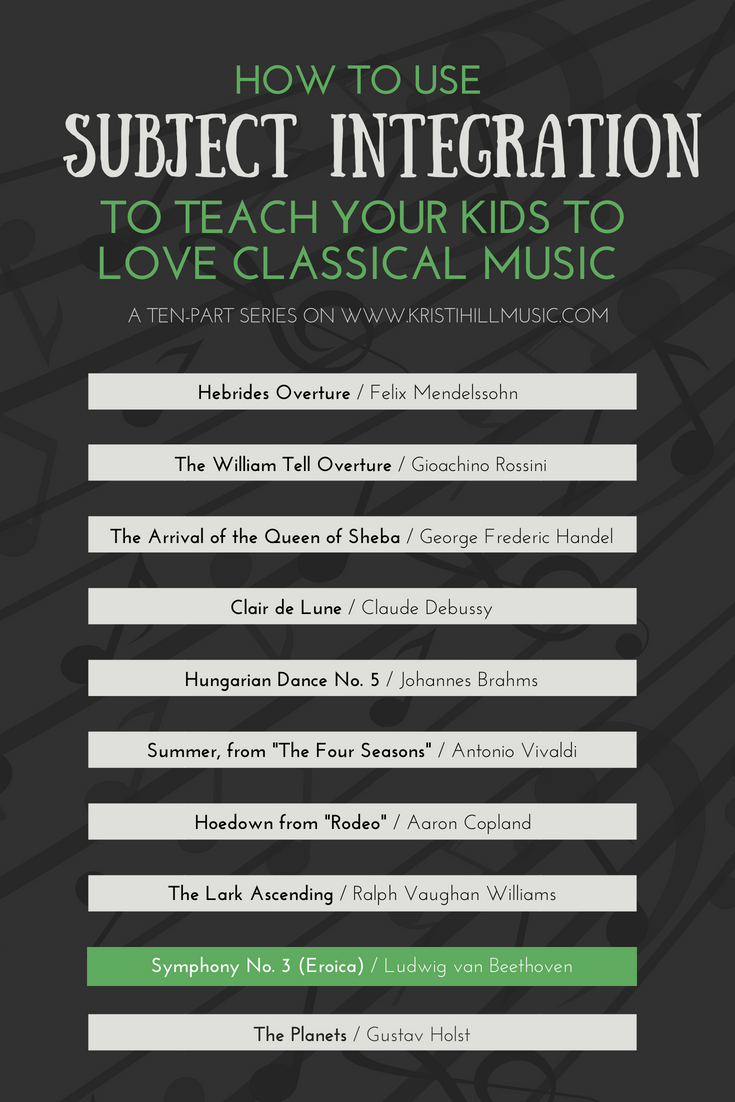 This piece has a super interesting background. First, Ludwig was beginning to grow deaf during its writing. He was fighting increasing despair, seeking solace in his work. This symphony marked a professional turning point for the tortured composer. (Yes, tortured. He was a cantankerous chap, to say the least.)

Eroica means heroic, so that gives you an idea of where we are headed here. It’s hard to appreciate now, but this symphony was really out of the box at the time. It was bigger, louder, and more in-your-face than any symphony had ever been up to that point. It was shocking, intriguing, and a little pearl-clutching. People kind of couldn’t even with the whole thing.

Beethoven perceived himself as a free-spirited, independent thinker – a self-perception that lined up well with a little guy named Napoleon (#punintended) and the whole big conflict called the French Revolution. Ludwig was such a fan of the diminutive conqueror he dedicated his entire Symphony No. 3 to him.

But it didn’t last long.

See, Beethoven got the news in 1804 that Napoleon had declared himself emperor. That’s kind of the polar opposite of free-spirited and independent. Beethoven was not on board with that kind of power play, so he promptly withdrew his dedication. He even went so far as to scribble the self-proclaimed emperor’s name out on the musical score – so vigorously he left holes in the paper.

Lots of interesting history for this one! Give it a listen. It’s quite long, but you will hear the power from the very beginning.

Beethoven’s Symphony No. 3 lends itself to a strong connection with France and the French Revolution. Let your child’s interests lead you…

Find the top 10 largest cities in France HERE. Do some research to find one fun fact  about each city.

The French Revolution took place when the people overthrew the ruling monarchy and took control of the government. Head HERE for kid-friendly details.  Older children can head HERE.