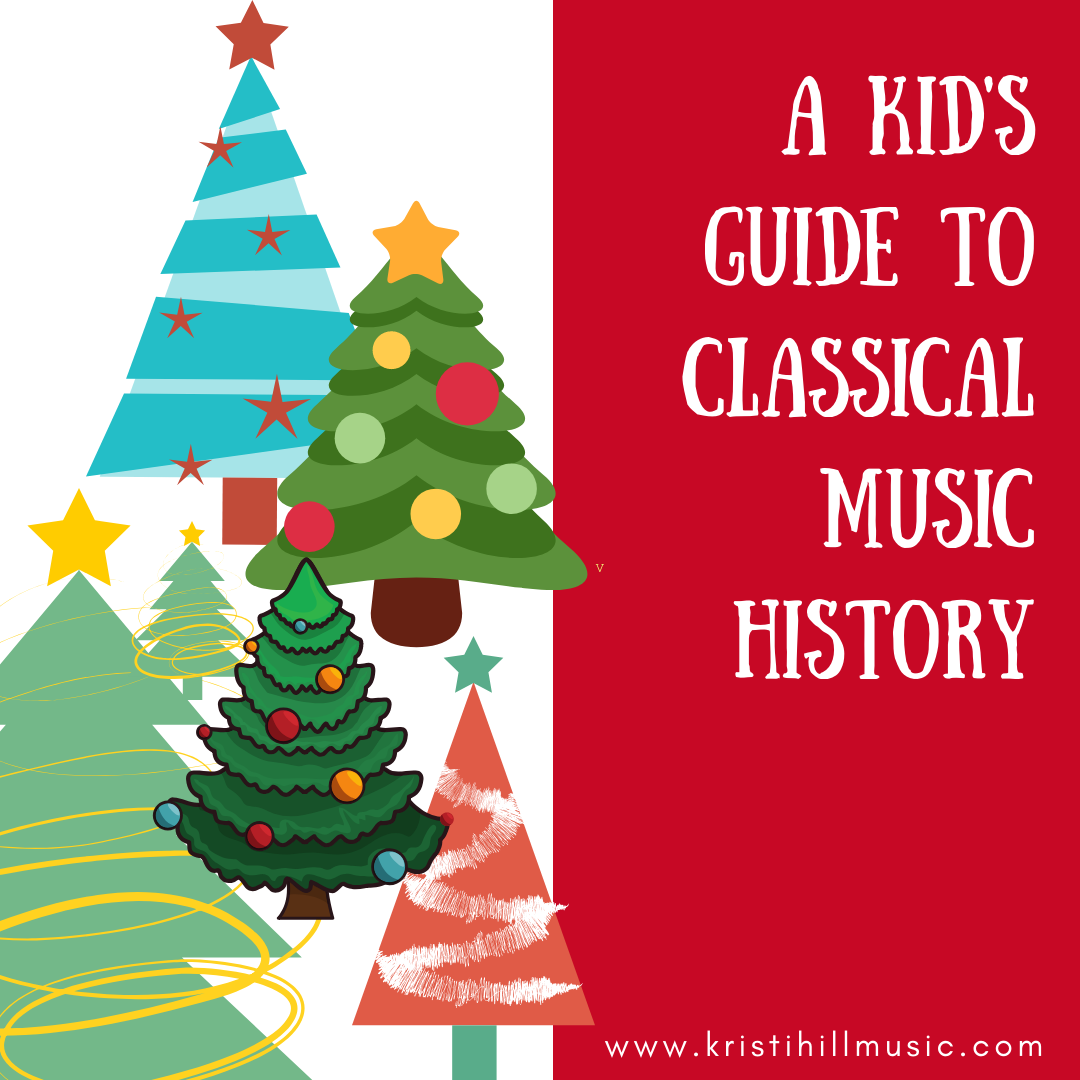 Want a free lesson in your inbox every Monday? Sign up for my newsletter!

Fancy music people often throw words like baroque and romantic around as if everyone is supposed to know what they mean. If you are a parent trying to help your kids learn about the world of classical music, unfamiliar words can make it seem like it’s all just too hard, too complicated — and frankly, so inaccessible it’s just not worth it.

That’s a shame, because it’s really not too hard. I want to help you break it down for your kids in a really fun way.

There are four primary periods in classical music history. There are others (google Renaissance music if you want to get your lute on and feel like you are walking around a medieval festival). There are also sub-genres among the main ones.

But we are going to keep it simple with the Big Four:

When I am teaching my students the difference in these time periods, I head straight to a metaphor that is both accessible and fun: the Christmas tree.

Let me explain with a visual: 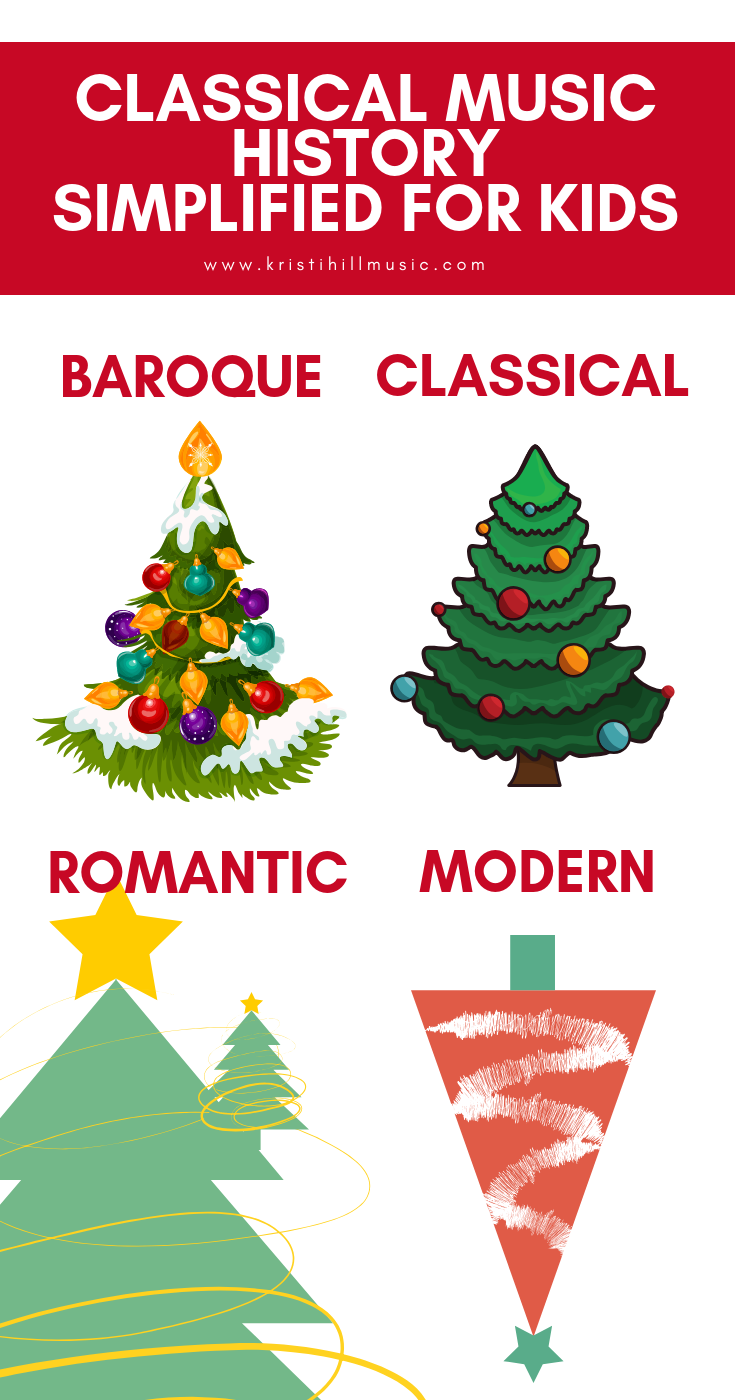 It’s not (quite) as crazy as it looks.

Ready to break it down?

The baroque period is marked by complicated patterns, layered instrumentation, and a fancy thing called counterpoint (where multiple melodies lay on top of one another, fitting together like a harmonious puzzle).

The word baroque actually means ornamented. (Learning that little tidbit was my impetus for this entire illustration.) More is more was the theme of the baroque period. Composers were not afraid to pull out every tool in the arsenal. Subtlety was not the order of the day.

Ok, hold on to your parchment, because it’s about to get complicated.

I didn’t invent these terms, I just teach them.

Confusingly enough, all the old music that we study, music that has stood the test of time, somehow got labeled classical music. Under the term classical music, however, there are the four distinct periods we are now breaking down: baroque, classical, romantic, modern.

See what’s happening there? The second major period in music history is classical. Not to be confused with the umbrella term classical that describes ALL the music we are studying.

You are going to have to go with the context clues, my friends.

Classical music was a big reaction to baroque. Everyone decided more was indeed not more. A refined, elegant approach to music became the desire of the day. Remember that thing called counterpoint from the baroque period? Yeah, nobody liked that anymore. People started to favor a single, strong melody line instead of all those moving parts. If we were to switch to a clothing metaphor, the classical period would be a sharp tuxedo. Classy and tasteful.

Keen-eyed article scanners may have noticed a repeat name on the list above and the list below. We will get to that in a minute.

Despite the label, romantic music had nothing to do with romance (or your favorite rom-com movie). It just meant music was becoming less restrained and more emotive. Romantic music was all about feelings. Composers wrote music not to entertain you, but to make you feel something.

Romantic music was the roller coaster that suddenly seemed exciting after the classical period’s carousel.

But how did it come about?

The music world views the great Ludwig van Beethoven as the single person responsible for pioneering the transition from classical to romantic.

And it was because of his hearing loss.

After his first two symphonies, Beethoven’ hearing loss was growing more and more alarming, and he shifted into a new sense of urgency with his compositions. It was almost as if he was willing to take more risks and stretch his creativity, not knowing how long he would be able to hear his own work.

His boundary pushing was incredibly influential. Other composers followed suit, and the entire romantic movement was born.

Also known as 20th Century music, the modern time period is pretty much defined by composers deciding everything had been done already, so why not just go nuts? Play notes that sound terrible together. Abandon all sense of pattern and predictability. Experiment with unusual instrument combinations.

Break all the rules.

I’ll be honest: a lot of modern music is not that pleasing to the ears. I’m including Stravinsky in the list below only because I have to. Not because I like his music. It is awful in the worst way. But kids find it pretty entertaining! Children enjoy knowing that something that sounds so bad can be famous and well-regarded.

Don’t worry, though…there are lots of gems out there in the modern camp. Many pieces fall into this category because there were out of the box in all kinds of ways.

So, that’s your down-and-dirty overview. The good news is, we are just getting started. The next four weeks will cover a deep dive into each history period, with loads of stories and notable examples. By the time we are done, baroque, classical, romantic, and modern will be second nature terms to you, and music history won’t be quite so mysterious anymore. Best of all, you will feel equipped to unpack it all for your kids!

So I’ll see you next week, when I will inevitably used the cliched phrase, “if it ain’t baroque, don’t fix it…”

See you next week, my friends!

Decked the halls a little bit for our new round of

Putting the finishing touches on our new round of