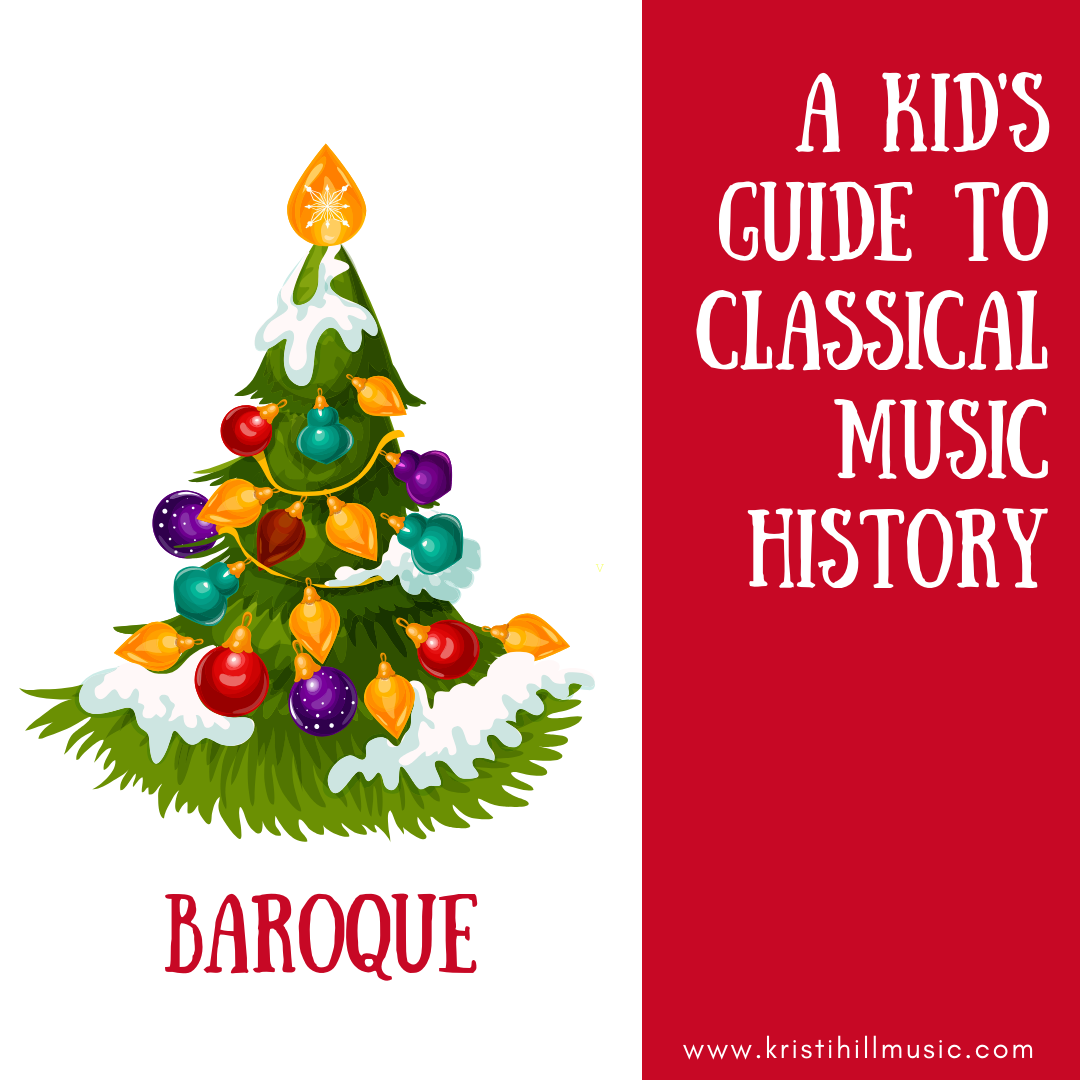 This is Part 2 in a series breaking down Classical Music history in a fun and accessible way for children. Today we tackle the Baroque period.

Head back to Part 1 for the overview (and the full tree explanation) and check back over the next few weeks as we continue on with the classical, romantic, and modern periods.

THE BAROQUE ERA: EXPLAINED FOR KIDS

The baroque period is marked by complicated patterns, layered instrumentation, and a fancy thing called counterpoint (where multiple melodies lay on top of one another, fitting together like a harmonious puzzle).

The word baroque actually means ornamented. More is more was the theme of the baroque period. Composers were not afraid to pull out every tool in the arsenal. Subtlety was not the order of the day.

Baroque music reigned supreme from 1600-ish to the mid 1700s. When it comes to all of these music history time periods, it’s important to remember it’s a style, not a rigid time period. Composers long after the mid-1700s still composed in a baroque style. The 150 years we are referencing are what we will call the heyday.

And a heyday it was!

There were three big composers that made their mark in the baroque period, representing three different countries.

Johann Sebastian Bach held down the fort in Germany, working mostly for the church and for royal families. He was not at all famous in his day. In fact, when he died, nobody much cared at all. It wasn’t until almost 100 years later that his music was revived and he became the household name he is today.

Also born in Germany, George Frederic Handel made for England fairly early in his career. Contrary to Bach, Handel was quite famous when he was alive. He was the toast of London, in fact. He also wrote music for the royals, working directly for the King of England. He himself was the king of the oratorio (a big collection of music similar to an opera, but without costumes and set and content mostly from the Bible).

Meanwhile, Antonio Vivaldi was Captain Baroque in Italy. He was a trained priest and a teacher. He also wrote for the church, but was ahead of his time in many ways.

Isn’t it cool to think that three different composers in three different countries were writing music that had similar characteristics? This was before any kind of communication beyond the snail-iest of snail mail, so it’s kind of amazing to think any consistencies would exist at all!

Let’s dive into some examples!

Johann was looking to move royal houses (the grass is always greener on the other side of the palace), and he had his eyes trained on the Marquis of Brandenburg as his new employer. Composers made money creating music for aristocrats, and working for the best court was to a composer’s advantage. The Marquis must have been a desirable boss. So Bach went to work creating music to impress him and get a job. It worked; he got hired. But there is no evidence the Marquis ever actually heard the music! No matter, Bach’s Brandenburg Concertos are now super famous and considered classic examples of baroque music.

Remember, the baroque period is known for counterpoint (multiple melodies fitting together like a puzzle). There are six Brandenburg Concertos, and each one allows different instruments to move to the forefront (be the biggest pieces of the puzzle), but the background instruments have an important role as well (filling in the puzzle gaps, so to speak).

Head HERE for all six, or try #1 to get you started:

Meanwhile in England, Handel was executing his own take on the baroque period. Handel’s version of baroque was a little more oriented toward entertaining the masses. He created operas and oratorios that were attended by a wider range of patrons (they were still wealthy, just not dukes and counts).

Finally, Antonio’s version of baroque, from several hundred miles away in Italy.

Vivaldi was working in Venice at its height. It was a city defined by wealth and power, and Vivaldi was in the middle of the fray, composing music right and left for the insatiable appetite of the city’s fanciest people.

Vivaldi’s Oboe Concertos are fantastically baroque. The oboe flits around like curious cat. It hardly stops. And if it does take a break, the other instruments fill in the gaps without missing a beat (literally). Baroque music does not really give your ears time to breathe, which was part of its charm:

I hope you have enjoyed our tour of baroque music, and I hope these descriptions help your kids understand it just a little bit more.

Next week we will button up our collars and sit up a little straighter. It’s time for classical.

See you next week!