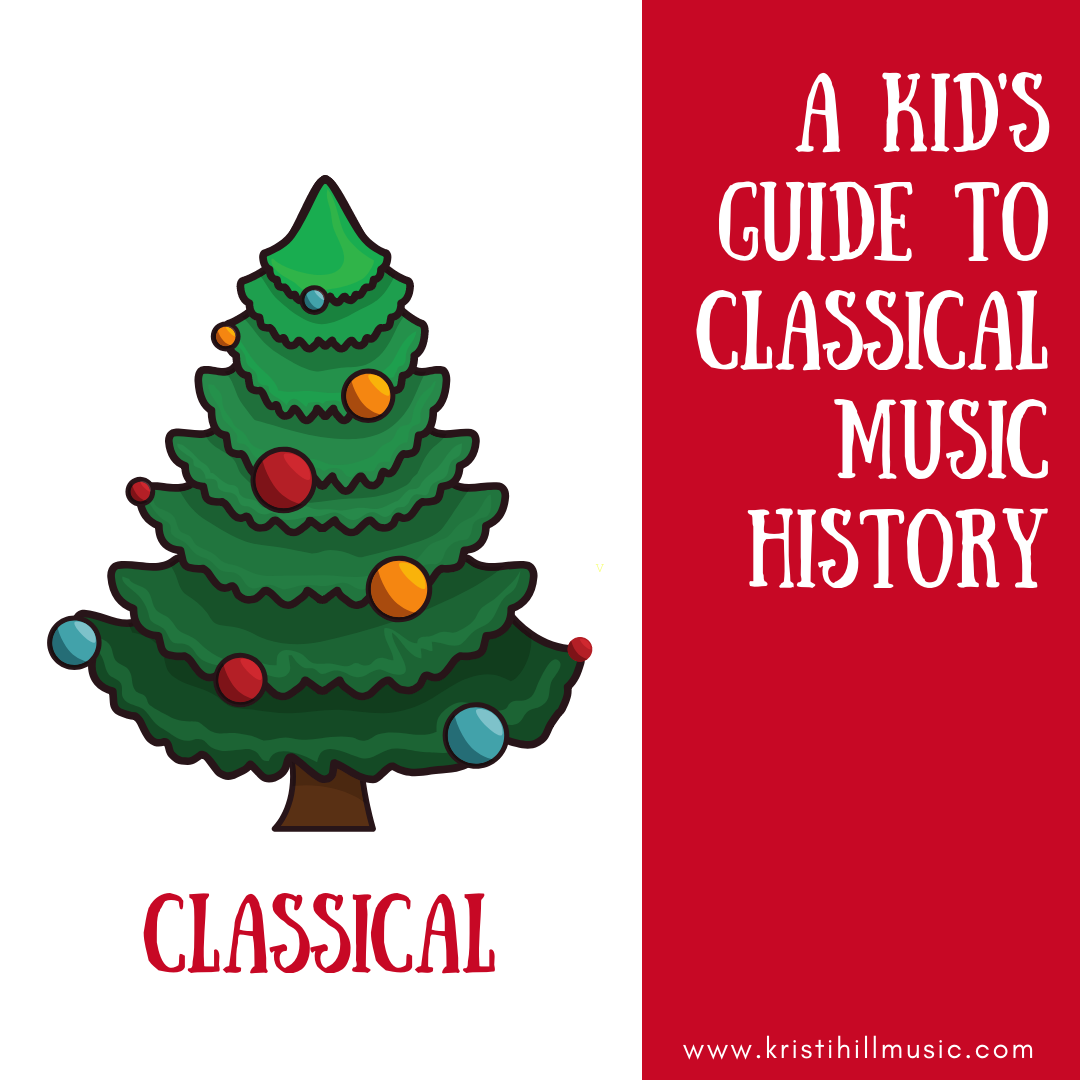 This is Part 3 in a series breaking down Classical Music history in a fun and accessible way for children. Last week was the baroque era, today’s it’s classical.

Head back to Part 1 for the overview (and the full tree explanation) and check back over the next two weeks as we continue on with romantic and modern.

THE CLASSICAL ERA: EXPLAINED FOR KIDS

Last week we discussed the overly embellished, more-is-more music history era known as the baroque period. The classical era music was a big pendulum swing to the other side.

Everyone decided more was indeed not more, and a more refined, elegant approach to music became the desire of the day. Remember that thing called counterpoint from the baroque period? Yeah, nobody liked that anymore. People started to favor a single, strong melody line instead of all those moving parts. If we were to switch to a clothing metaphor, the classical period would be a sharp tuxedo. Classy and tasteful.

Among the three composers we highlighted last week, baroque’s grand papa is undoubtedly Johann Sebastian Bach. So much so, that the year of his death often marks the end of the baroque period.

In fact, 1750 was the exact year baroque switched over to classical.

Actually, that’s not at all true.

Music history eras are much more squishy than that.

But for the sake of boundaries, we will go with 1750(ish) as the dawn of a new era: the buttoned up classical period. A major shift happened between baroque and classical, and it’s easy to explain to to your kids.

During the baroque period, music was primarily for the church. It was purposeful and had a serious job to do. During the classical period, music moved beyond those boundaries and became a source of entertainment. I know that sounds crazy. How could music have ever not been for the purpose of entertainment? Well, it just wasn’t – at least not in the way we know now.

The aristocrats of the day traded traded composers like currency. In addition to showing off their wealth with palaces and furnishings, having the best composers on their staff was a sign of prominence and wealth. Those composers were often tasked with creating party music for their employers’ guests. Music intended only to entertain.

Also contributing the music’s cultural shift was the fact that Europe was enjoying a season of prosperity. More people had means to attend concerts and performances. Saavy composers saw an opportunity to expand their income streams by bringing their music to larger audiences – for the sole purpose of entertaining them.

Our big three composers for the classical period are Haydn, Mozart, and Beethoven. Let’s get to know these influential guys…

Haydn was no big deal – he just invented a little thing called the symphony. Well, maybe he didn’t technically invent it, but he definitely made it famous.

A symphony is an elaborate musical composition for a big orchestra. It usually has four distinct parts, called movements. Haydn wrote a ton of them: 104 to be exact. He is fittingly known as the Father of the Symphony.

Haydn was also a clever fellow – and not afraid to make jokes with his music. His 45th symphony is known as the Farewell Symphony because Joseph was trying to send a little message to his royal employer: please allow my orchestra players to go home for the summer holiday.

Usually symphonies crescendo to an exciting end, but Haydn wrote his 45th so that each player would drop out one by one and leave the stage. This subtle message was supposed to communicate to the boss that the players were tired and ready to go home and see their families. It worked! The royal court departed to another palace the next day and Haydn’s orchestra members finally got to take a vacation.

It’s a fun story, and the Farewell Symphony is a great example of the classical era. Skip to the halfway mark and watch to the end to see how this orchestra reenacts the scene:

The music of the classical era is characterized by controlled emotions. No one wanted to see hearts-on-sleeves during this time in music history. It was all about dignified outward appearances. (Next week you will see how the romantic period brought a huge backlash to this way of thinking.)

While Haydn was subtle in his workplace communication, Mozart was known for being quite a rule breaker. The music was buttoned up, but this composer was not.

Mozart was a child prodigy, aggressively managed by his father. One story goes that Mozart had the audacity to converse with a dignitary while performing at a party (at the time, composers and musicians were more like hired help than party guests…socializing was seriously frowned upon). His father had to go to work to fight for his son’s job after this grave offense. It didn’t work, and Mozart was let go from his post.

In our baroque lesson, we talked about counterpoint (where multiple melodies lay on top of one another, fitting together like a harmonious puzzle). The classical era saw the rise of strong, hummable melody lines — and no one did them better than Mozart. Click play on this classic example…I bet you will begin singing along:

Our third example for the classical era is an interesting one, because he will show up next week as well. Ludwig van Beethoven is single-handedly credited with bridging the gap between the classical and romantic eras. But I’m getting ahead of myself…there is more to come on that front!

For today, let’s hone in on a classic classical piece from this masterful composer. Beethoven is famous for his nine symphonies, and the first two are firmly in classical territory. No. 3 gets a little wild and crazy, but we will save that for next week.

For now, don your pearls, sit up straight, and let’s go out with a (very tasteful) bang. Behold, some very classical Beethoven:

I hope you have enjoyed our tour of classical music, and I hope these descriptions help your kids understand it just a little bit more.