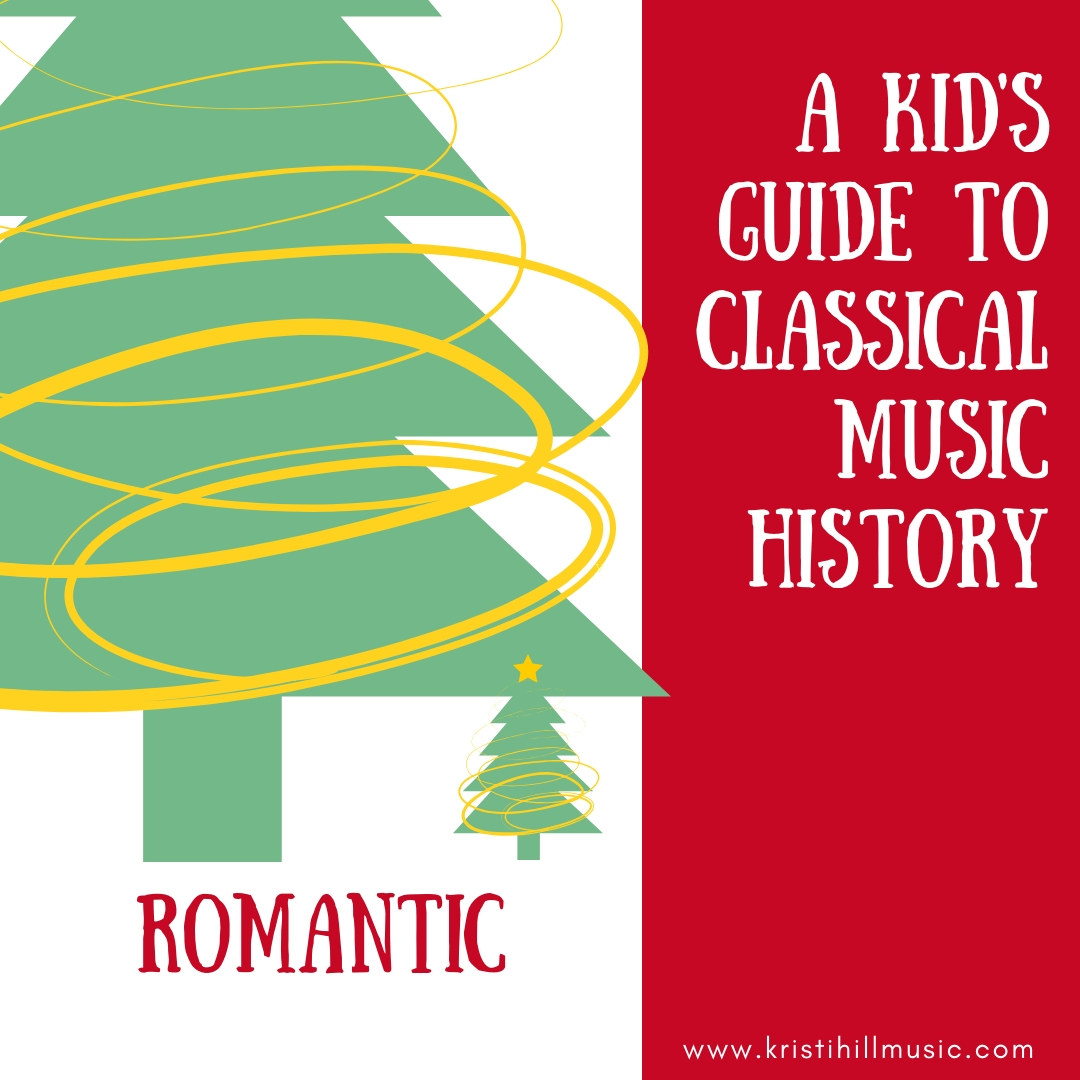 This is Part 4 in a series breaking down Classical Music history in a fun and accessible way for children. Previous weeks have covered  baroque and classical.

Head back to Part 1 for the overview (and the full tree explanation) and check back next week as we finish out with the modern era!

THE ROMANTIC ERA: EXPLAINED FOR KIDS

Despite the label, romantic music had nothing to do with romance. It just meant music was becoming less restrained and more emotive. Romantic music was all about feelings. In the baroque era, music was purposeful – primarily for the church. The classical era saw a switch to music being for entertainment. The romantic era wasn’t so much about tickling people’s fancies as it was about making listeners feel something.

Romantic music was the roller coaster that suddenly seemed exciting after the classical period’s carousel.

But how did it come about? We will cover that in a second. For now, our bullet point review:

The music world views Beethoven as the single person responsible for pioneering the transition from classical to romantic.

And it was because of tragedy.

The entire course of music history shifted because of one man’s crisis.

As a young man, Beethoven gradually — oh so gradually — began losing his hearing. After his first two symphonies (we listened to No.1 last week), the situation became more and more alarming. Beethoven shifted into a new sense of urgency with his compositions. It was almost as if he was willing to take more risks and stretch his creativity, not knowing how long he would be able to hear his own work. This shift first became evident in his 3rd Symphony, nicknamed Eroica.

It has a great back story.

Eroica means heroic, so that gives you an idea of where we are headed here. It’s hard to appreciate now, but this symphony was really out of the box at the time. Eroica was bigger, louder, and more in-your-face than any symphony had ever been up to that point. It was shocking, intriguing, and a little pearl-clutching.

People kind of couldn’t even with the whole thing.

Beethoven perceived himself as a free-spirited, independent thinker – a self-perception that lined up well with a little guy named Napoleon (#punintended) and the whole big conflict called the French Revolution. Ludwig was such a fan of the diminutive conqueror he dedicated his entire Symphony No. 3 to him.

But it didn’t last long.

See, Beethoven got the news in 1804 that Napoleon had declared himself emperor. That’s kind of the polar opposite of free-spirited and independent. Beethoven was not on board with that kind of power play, so he promptly withdrew his dedication. He even went so far as to scribble the self-proclaimed emperor’s name out on the musical score – so vigorously he left holes in the paper.

Take a listen and see if you can tell a difference from Symphony No. 1 in last week’s lesson.

Johannes Brahms is sometimes known as the romantic classicist or the classical romantic…which basically means that he liked to keep things old school. He was romantic in the exact opposite way of Beethoven.

Beethoven was known for pushing the boundaries toward change. Brahms was known for preserving the past in the midst of change. They were both super romantic, but from opposite perspectives. Brahms didn’t always like all the change happening around him, and his work was oriented towards making sure classical music continued to be represented in this new era. His romantic expression of the classical era was in itself a lot of change…and it’s what he is remembered for. It’s kind of ironic. #dontyouthink?

Brahms was also heavily involved in a romantic era trend around folk tunes. Composers during the romantic era loved tapping into other cultures by taking local tunes and incorporating them into larger works. Brahms is particularly famous for a series of Hungarian dances inspired by his time touring with famous Hungarian violinist Eduard Reményi. I am including No. 5 – it’s super danceable! Notice how the tempo (how fast or slow the pace is) varies. It slows down and speeds up to create drama and excitement:

Hailing from the land of borscht, Peter Tchaikovsky is famous for his Russian approach to the romantic movement. His music is full of forceful emotion and hooks that won’t quit. That means you find yourself humming his melodies long after your Spotify app has closed.

The most lasting examples are from the world of ballet. Tchaikovsky is most remembered for the music he created for Swan Lake, Sleeping Beauty, and The Nutcracker. Choosing just one example to share with you is a near impossibility.

I am going with Swan Lake. I can’t resist – it’s just so romantic. Epic in scope, high drama, big feels – this piece hits all the romantic high points. Pay special attention to how the theme is presented in the first minute and then repeated (with high drama!) into the second minute. Then at around 2:25 it gets even bigger. This is romantic, in a nutshell, my friends:

I hope you have enjoyed our tour of romantic music, and I hope these descriptions help your kids understand it just a little bit more.

Next week we will cover our final era — the no-rules modern period.

Decked the halls a little bit for our new round of

Putting the finishing touches on our new round of