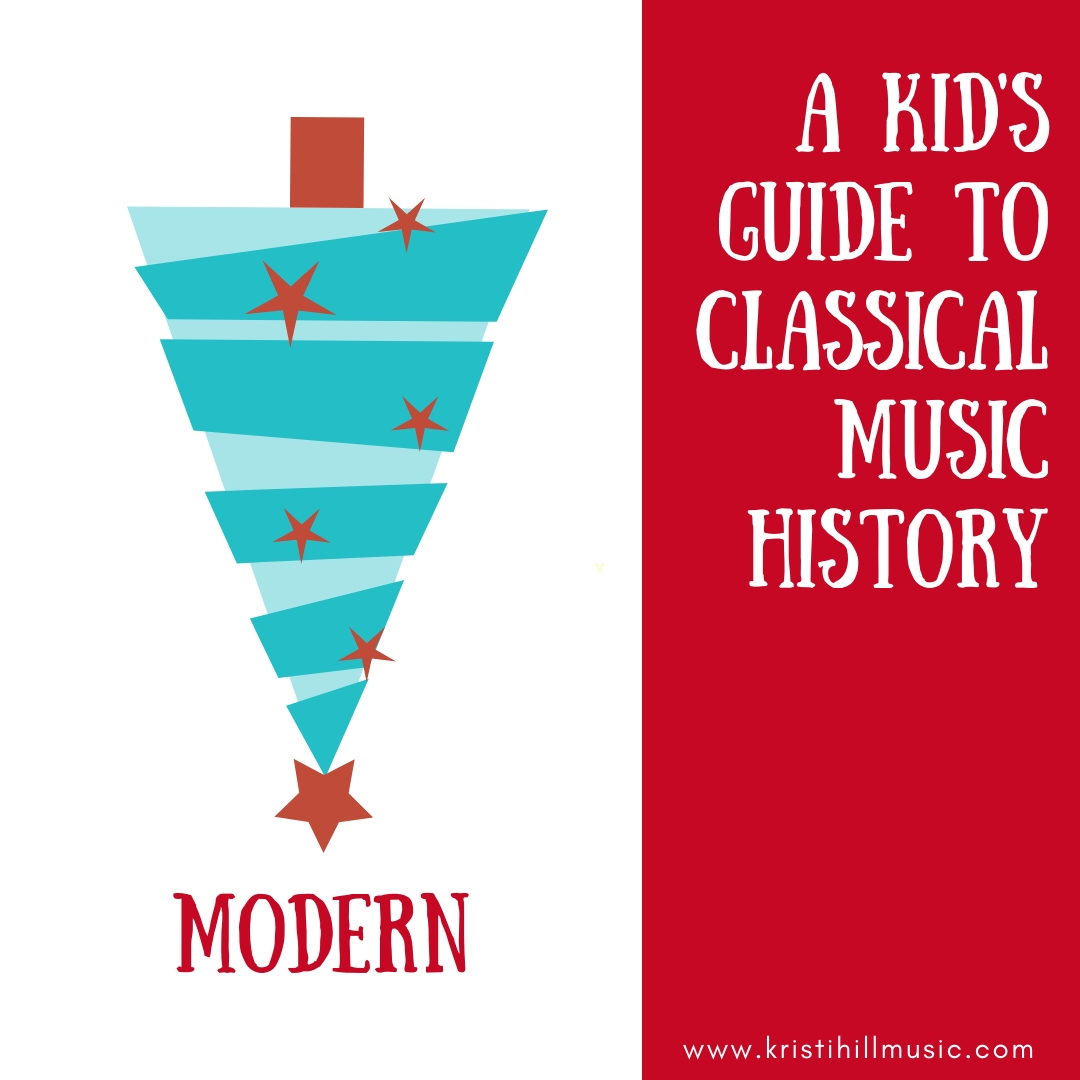 This is Part 5 in a series breaking down Classical Music history in a fun and accessible way for children. Previous weeks have covered  baroque, classical, and romantic. Today we finish with the modern era.

Head back to Part 1 for the overview (and the full tree explanation!).

THE MODERN ERA: EXPLAINED FOR KIDS

Also known as 20th Century music, the modern time period is pretty much defined by composers deciding everything had been done already, so why not just go nuts? Play notes that sound terrible together. Abandon all sense of pattern and predictability. Experiment with unusual instrument combinations.

Break all the rules.

Up to this point in music history, classical music was heavy on structure. During the previous eras, you could pretty much count on understanding what was coming at you by how it was labeled: concerto, sonata, symphony, etc.

I explain it to my students like a baseball game. (I know…Christmas trees…now sports!)

When you go to a baseball game, you can count on a few things. Two teams, nine innings, three outs per team per inning. The structure is pretty clear.

But what if you showed up to a baseball game and there were three teams? But one of the teams only plays half the game. The number of outs vary per inning, and you never know what team is going to be at-bat. That would feel a little disconcerting, right?

That’s sort of what happened with the modern period in music. All of the structures that had been in place up to that point (concertos, sonatas, symphonies) no longer carried any sense of certainty. When people showed up to a performance, they had no idea what they were going to get. Music became extremely unpredictable and a little confusing.

It was an adventurous time to be a composer.

Let’s dive into learning about three of these rule-breakers…

We are going to start with a little sub-genre within the modern period, known as impressionism. You are probably familiar with the term in the art world, through the works of famous artists Monet and Degas. What those guys were doing with paint brushes and clay, Claude Debussy was doing with instruments.

It’s challenging to see now, but Debussy’s free-flowing melodies were pretty revolutionary for the time. While other composers were still swimming in the deeply romantic pool, Debussy was quietly penning rule-breaking tunes that caused people to lean in, rather than lean out. Debussy’ music wasn’t intended to shock or surprise anyone…and, ironically, that made it quite shocking and surprising. After the highly expressive romantic period, Debussy’s muted, sparse melodies seemed revolutionary…and quite modern.

Debussy’s Clair de Lune is French for light of the moon, or more simply, moonlight. The piece is the 3rd movement of a larger collection of music, and it is based off a French poem that describes the moon as “sad and lovely.”

See if your kids can hear it!

Meanwhile in Russia, Igor Stravinsky was breaking rules in his own way. He was actually famous for writing in all kinds of styles, an inherently modern approach to writing music. No boxes, no boundaries. Lots of experimentation. Very modern.

His famous The Rite of Spring was so controversial and provocative that a riot broke out at the premiere! People were shocked by the harsh melodies. It was physically upsetting to listeners.

I’ll be honest: this music is not pleasing to the ears, at least in my taste. I’m including Stravinsky in this list below only because I have to — he was a pioneer. It’s not because I like his music. But kids find it pretty entertaining! Children enjoy knowing that something that sounds so bad can be famous and well-regarded.

Older children will learn a lot from the opening six minutes of commentary included here. For the horrible music, go ahead and fast forward…and see how much you can stand 😉

Okay, now we are done with that. Back to modern music that is actually pleasant to listen to!

Aaron Copland is one of America’s most notable composers. He was born in 1900 and lived and worked in New York City most of his life. His approach to music broke ranks with tradition not completely because of what he wrote, but who he wrote it for.

If you will remember from our posts on the baroque and classical periods, music was a primarily a privilege for the wealthy. Common people didn’t have access to music until the dawn of the 20th century, when the industrial revolution changed everything. Aaron Copland wanted his music to serve the people in a way that was fresh and new. Music wasn’t for the rich and aristocratic anymore. Music was for everyone.

Copland was also intrigued by the composers creating highly nationalistic music – stamped with its home country’s flavor and personality (we talked about Brahms’ folk tunes in the romantic lesson). Copland saw the need for the U.S to have her own sort of music, and he set out to make his mark. He would ultimately make a name for himself composing ballets on very “American” themes — westerns, pioneers, and small town life. Copland was composing music on common themes for common people – a very modern approach to music.

Hoedown is from Copland’s western ballet, Rodeo. It is one of my absolute favorites for kids. They will love this one!

I hope you have enjoyed our tour of modern music, and I hope these descriptions help your kids understand it just a little bit more.

This error message is only visible to WordPress admins