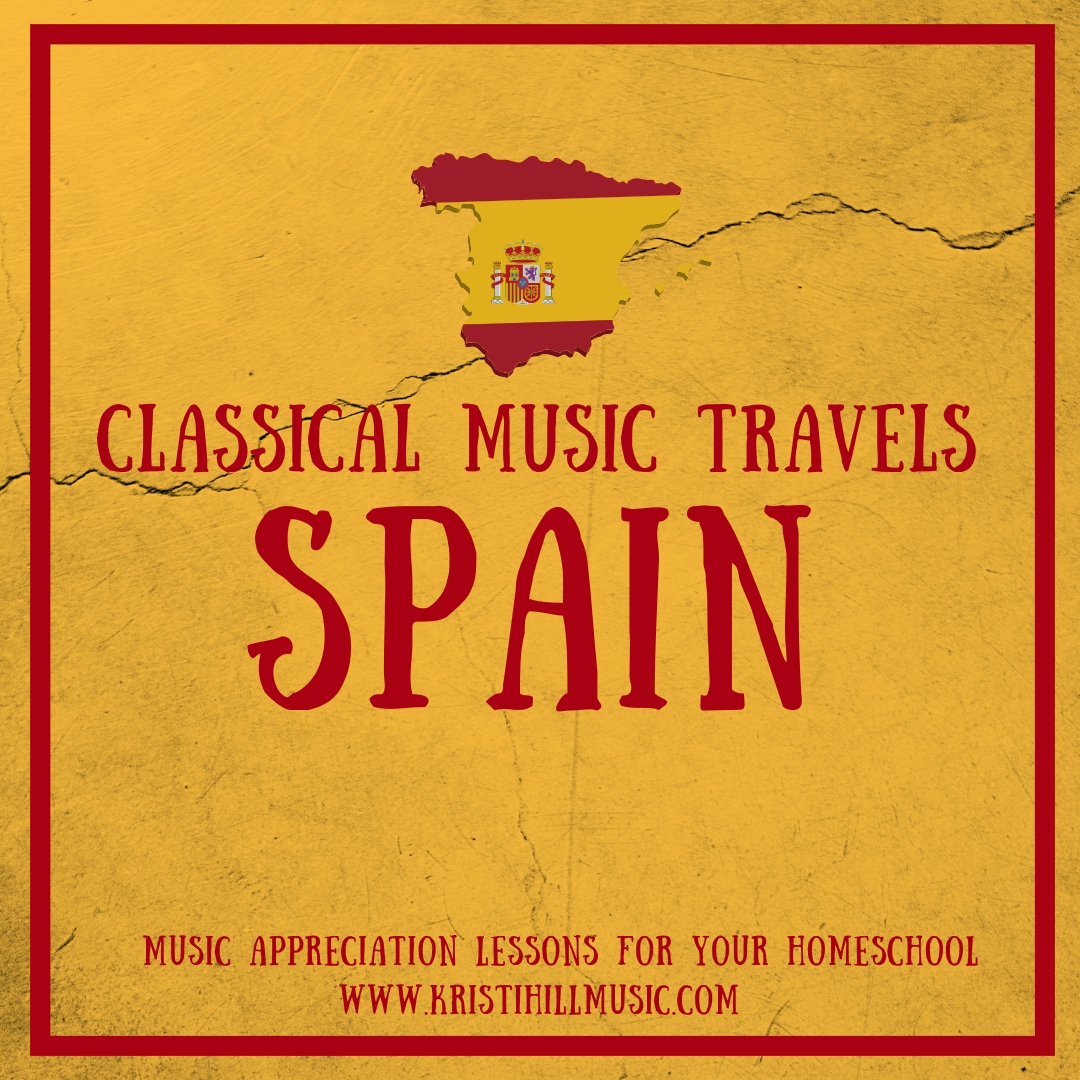 It’s time for another installment of Classical Music Travels. This series is designed to help you mash up music appreciation with lots of other subjects. I say it all the time (because it is true!)…classical music studied in isolation is often way too abstract for young children. Attaching music appreciation studies to other subjects, however? Now we are talking.

Previous posts have transported us to Paris and Russia. Today we head a little father south…to the land of tapas and flamenco: Spain.

Interestingly, none of the composers were are featuring today are Spanish, and we are starting with a Russian, which is REALLY weird. Spain doesn’t have much of a history of classical music composers, strangely enough.

The inspiration for Capriccio Espagnol came from Nikolai Rimsky-Korsakov’s stint sailing a Navy ship as a young man. Ports in Spain allowed him exposure to local melodies that helped shape this piece. It kicks off with liberal use of the tambourine — a win in the eyes of any child 😉

The Spanish are pretty much the reason we have chocolate today (let’s all applaud that!). South American conquerors delivered chocolate beans back to Europe, so Tchaikovsky’s association between Spanish music and chocolate makes sense. This is one of the feature dances during Clara’s visit to the land of sweets in Tchaikovsky’s The Nutcracker.

March of the Toreadors // Bizet

French composer George Bizet longed to create a great opera, which he did…sort of. Carmen premiered to horrendous reviews, and then Bizet died unexpectedly, believing his life’s work to be a complete failure. The genius of his creation was recognized later, however, and now Carmen is considered one of the greatest operas of all time. It takes place in sun-soaked Seville, Spain…land of bull-fighting and matadors.

Maurice Ravel, another French composer, composed the Spanish-flavored Bolero as a ballet for a famous Russian dancer. So many countries in one sentence! This tune has been described as relentless and insistent. Kind of like a toddler, except it’s classical music.

Johann Strauss is the most famous of a trio of Strauss composers (the other two being his father and his less-famous brother). He is particularly known for his catchy waltzes and marches. His music was the hottest thing in Vienna, and crowds loved anything he produced. His Spanish March is not his most famous piece (this is)…but it is definitely the most Spanish…

Here’s where it gets fun. Choose one of these activities (or let them spark your own ideas), and allow the activity and the music to work in tandem with one another.